Ten years… and now ?
A first decade, the time to take stock ? Over this small fraction of a century, the Alps have changed. Not always favourably. Cultural diversity and the variety of the rural heritage that are the essence of the Alps are still being destroyed. Amid general indifference. Real debate is needed on the future of the Alps and their population, a debate in which L’Alpe will take an active part and a good raison d’être for the next ten years !

Do you remember, André ?
André Pitte was the father of L’Alpe. He would have found it «  formidable  » that the review of which he was so proud had reached ten years. A man of ideas and friendship, he would have been happy to see gathered for the occasion all the people who participated in the over 40 issues already published. He was a joyous partaker in mountains, words and meals who left us in 2006, but his enthusiasm continues to inspire. A fraternal tribute.

Really magic, the mountains ?
Is ecstasy mandatory when viewing the «  magnificent  » Alpine landscapes ? And must one necessarily bow to mountain virtues ? Here is an iconoclastic scrubbing of clichés and stereotypes, that questions the idealised presentation of the Alps and the eternal nature of Alpine myths.

Original landscapes
Can an old, faded photo serve as the template for our perception of the world ? Inject into the unconscious a native landscape that brands you for life ? The image of a family tragedy was a profound experience for the author and shaped his perception of Alpine landscapes. As well as his inclination toward a genre of contemporary photography highlighting an intimate and unpolished perception of mountains. Memories.

Third dimension
How do people live without the third dimension ? Whether looking up or down, living on the north or south slope, in a hollow or on a hill, in the shadow or in the light, in front of a fire or on the face of a cliff, in the pasture or in a café, mountains are the place to be !

The ice princess
In 1968, Peggy Fleming took part in the Grenoble Winter Olympics, having already won two world titles. In the sports arena, the U.S. skater danced and twirled, in a rare display of emotion. An image of grace on ice and the start of many a passion for figure skating.

Notebook
Scribbled during climbs and between two sketches, many and varied are the observations in the notebook of a mountaineer. A small catalogue of pertinent and impertinent ideas collected in mountains from every corner of the world.

My alp
Certain authors require only a few lines to evoke «  their  » mountain. To say nothing of the image people who also have something to say. A collection of short texts and photos interspersed throughout this issue in three «  intermissions  ».

Road movie in Helvetia
Escape, climb on the motorcycle and flee one’s home mountains in a search, beyond the next mountain pass, for new horizons. But in the land of Heidi, a step too far and the exotic becomes a postcard. A revved up trip by a guy from the Valais, happy to be home.

Elevator to the summits ?
A dream, the idea to link the bowels of the Alps to a small Swiss village ? To merge continental transport with local development ? High-speed transit under the Gothard with the meanderings of a walker on the high ? This visionary project will not come to be. But it remains an outstanding example of the questions confronting the development of the Alpine territory.

The big herd
From the Camargue to the Vercors, the transhumance traces a path of friendship, linking places and people. In the shadows of the Alpine sheep barn, everyone takes place around the table to share, laugh, eat, discuss projects and reinvent the world. Could this be happiness ?

Happy like a stone
He has been dealing with stones for a long time. He is always picking them up, gathering them and he then presents them in a mineral form of poetry. To his eyes, the little stones are sculptures and weighty as words. The result is a very personal mix of alp and art.

Return of the Alpine cretin
A revival of this fundamental character in the Alpine world is a mission to restore heritage to which the author of these words has devoted his time and efforts. Taking advantage of a trip to the Savoy, he worked relentlessly to recreate a past that one might have thought had disappeared forever. There remains the issue of determining just who is the cretin.

Cycling to the Alps
A passion for the Alps may start on two wheels. And the paths leading to pastoralism may be those of the major passes in the Tour de France ! From the hairpin turns to the grassy slopes, the story of how a young ethnologist discovered the mountains and shepherds thanks to his cycling heroes.

Save the lakes !
In Switzerland, mountains and lakes have long stood opposed. The patriotic shadows of the former have long masked the archaeological treasures of the lakes around the Alps. In Neuchâtel, the goal is to have them listed among the Unesco world heritage sites. Will the recent discovery of a flooded Neolithic village in the historic heart of the Alps reconcile the summits and the lakes ?

Alouette, Alouette
Memories swirl under the blades. A wounded Alouette brings back the past and a painful, intimate alp. A return to the scene not far from Mont Blanc, under the cables of the Aiguille du Midi cable car.

Behind the scenes at L’Alpe
Ten candles… just a skip in time, but a giant step for our review. And the occasion to reveal the lesser known aspects of a long birthing, as well as the fairy godmothers who gathered around the cradle of a novel project that is now part of the cultural landscape of the Alps. And that has been, above all, a human adventure.

A lighthouse in the mountains ?
In 1998, the founder of Alpes Magazine discovered L’Alpe with a bit of envy. Ten years later, her professional career has led her to new horizons, but with the new experience, Claude Comet continues to dream… about the ten years to come and an outspoken review that would serve as a beacon for the Alpine inhabitants. Go for it ! 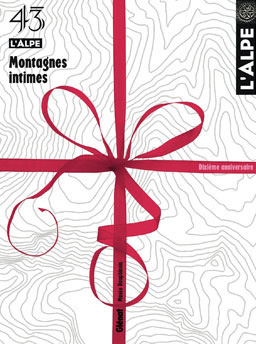