I walk, therefore I am

The history of walking in the Alps is very long. Though today a pleasure, it was initially high utilitarian. For peasants, shepherds, lumberjacks, peddlers, chimney sweeps, soldiers and many other workers, walking was their main means of locomotion. With the development of tourism, walking became a healthful sport rapidly adopted by outdoor enthusiasts. By Guillaume Lebaudy, ethnologist. 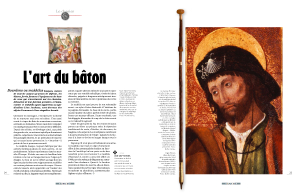 The art of the stick

Stout staffs and Basque makhilas tipped with metal, as much a defensive weapon as a walking stick, were basic equipment for those setting off on mountain trails. Some, such as the makhila belonging to trade unionist Léon Jouhaux, were later transformed into ornamental objects of striking beauty. By Jean-Loup Fontana, head curator for heritage.

Is walking a literary invention ?

From Conrad Gesner to George Sand, Rousseau and Goethe, hiking has produced some of the most beautiful pages of literature. As if the art of travel and the art of writing were cousins. Each of those pages portrays and bears witness to the perception of walking at a given time in history. A selection. By Claude Reichler, honorary professor at Lausanne University.

Martine Segalen, an anthropologist specialising in families, is also a marathon runner and sociologist of foot races. She looks back on her own experience in mountain hiking in the 70s when it was becoming a free-time activity for the masses. Memories of family outings… 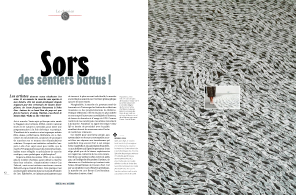 Artists like to shake things up. Walking is of course associated with sports and recreation, but it has long been an activity for creative types from Jean-Jacques Rousseau to Yoko Ono. Commenting the mecca of pop art, Andy Warhol’s Factory, Lou Reed said it all with his song “Walk on the wild side”. By Béatrice Josse, director of the National Centre for the Arts in Grenoble (Magasin des horizons).

Edmond Baudoin spent part of his childhood in the Roya Valley. Last summer, he did a number of portraits and sketches to produce a moving report on the situation of migrants. At the same time, Mariette Nodet, a historian and elementary-school teacher, was finishing a hike through the Alps, from north to south, with her small daughter Lou. The criss-crossing routes struck a chord deep in her heart. A portrait of a humanist peddler.

The (long) walk to school

Walking to learn. Walking for thousands of kilometres. Sometimes barefoot… They are between 14 and 16 years old and went through hell before crossing the mountains and arriving in this tiny village in the Hautes-Alpes department. Lætitia Cuvelier, writer and journalist, welcomed them on this leg of their long journey. She tells their story…

Save the Swiss Alpine Museum

In Bern, a major, cultural institution must fear for its future. We have often mentioned the remarkable exhibitions of this museum that, like us, is iconoclastic in its approach to Alpine cultures and heritage. Is there still a place for those with a different point of view ? And for the mountains in Swiss society ? By Bernard Debarbieux, professor of geography at Geneva University and Jean Guibal, editorial director of L’Alpe.

Should we simply forget ? Memories gone

In October 2017, the town of Chamonix destroyed a unique piece of industrial, technical and human patrimony, the service cable line to the Col du Midi. It was the last remaining vestige of the pioneering cableways launched at the turn of the last century and that culminated in 1955 when it became the highest line in the world, reaching the Aiguille du Midi (3 842 metres altitude). The service cars, cables and summit pylon are all gone. By Pierre-Louis Roy, specialised in the history of Alpine tourism. 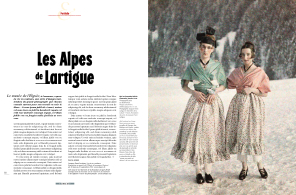 Lartigue and the Alps

The Élysée Museum, in Lausanne, presents La vie en couleurs, a series of unexpected images from the great photographer well known for his black and white photos. A chance to discover his love of the Alps where he often portrays people and notably Florette, his wife. An exhibition that is an ode to joy… By Pascal Kober, editor-in-chief at L’Alpe.

The stuff of heroes

On Ailefroide, Jean-Marc Rochette tells us of his youth in Grenoble and high in the mountains. An adventurous initiation that transformed the aspiring mountaineer into a major name in graphic novels. Hervé Frumy, our Arts director, shared the same passion for initiatory mountains. Souvenirs, souvenirs…