The Alps, a woman’s world ?
Just like the men, the women did their share of work in the fields and the mountain pastures. Life was tough for the Alpine peasants and constituted a paradoxical tribute for a very relative degree of liberty and autonomy that the women farther below had not yet achieved. An equal standing with respect to work that should not be confused with true equality.

Good times in the pastures
Free and happy, the young women from Lecco tended to the family herds in the mountains overlooking the Lago di Como. The summers were pleasant and all the more so when their suitors came to visit by night.

A world cut in two
A matriarchy ? Or simple stand-ins ? The men took off to earn a living in the towns and cities while the women were left to handle the work in the fields and assume the family responsibilities. An ambivalent situation in which the heavy work and the isolation conferred on the mountain women a share of autonomy and equality unknown elsewhere.

The shepherdesses speak
Young, often city-bred and increasingly numerous, women are now finding their vocation in the shepherding trade, to the content of one and all. Exit the stereotypes of yesteryear, with distaff and spinning wheel, but their incursion in a male-dominated world is not always easy. Accounts.

Nursing nannies
Abundant milk was their unique source of livelihood. In certain parts of the Italian Alps, young mothers had to abandon their child and village to nurse the children of the bourgeois families in the cities. An uncommon and painful way to emigrate.

Haute couture on the high
Flower girls and butterfly women in the Maurienne valley have long been a source of admiration for all who come across them. For example, the young English woman Estella Canziani at the start of the last century who portrayed the shimmering colours of their costumes in her watercolour paintings. The festive clothing is still worn today and bears witness to an exceptional degree of creativity.

A Joan of Arc from the Dauphiné ?
A proud Amazon in bronze, she leads her troops into battle under the branches of the tall trees in the Jardin des Dauphins in Grenoble. The passing visitor cannot but be intrigued on reading ‘Philis de la Charce, Heroine of the Dauphiné  ». What fabulous deeds warranted the statue of the warring woman ? Somewhere between history and legend, the story of a woman involved in her times.

The Sherpanis of Mount Rose
A large basket strapped to their back, they carried the belongings of the tourists calling on their services in the mountains. With their knowledge of all the trails and accustomed to heavy loads, these Italian women earned their living as porters, similar to the Sherpanis in the Himalayas.

The country where women could (truly) rule
In the Pyrenees, an uncommon set of customs offered women social positions far ahead of their time in a Europe still dominated by the most blatant sexist attitudes. A law of the ‘house  » that was not without consequences on the sex life of these very liberated mountain women.

Mama or whore ?
The image of women in the New Art movement in Switzerland is perfectly clear. In spite of the ideas of the suffragettes gaining ground in the Alps, the women portrayed by the symbolic painters still represent the harmony of an Alpine Eden. Perhaps a complacent vision of the final lines of Faust II by Goethe, concerning the eternal feminine drawing us up to the light.

Local people, women from afar
Beautiful foreigners are now the wedded wives of the peasants in the high valleys abandoned by the Tyrolean women. In these rural areas still set in the ancient ways, the mountain men could no longer find a mate. So they went looking beyond the borders, from Poland to the Philippines.

Portfolio – Erika Hubatschek, a life spent in steep places
Photography as a geographic undertaking. For more than sixty years, Erika Hubatschek, an Austrian geographer turned photographer, has been roaming the Tyrolean mountain pastures to collect fragments of a disappearing world, that of the Alpine communities. By partaking in the lives of the mountain farmers and working at their side, she has listened to them and above all observed them like no other photographer.

No, the glaciers are not melting !
With factual evidence, a glaciologist contests the alarming statements found in numerous media concerning the eventual disappearance of glaciers due to global warming. Counterpoint.

The writing walls
Ground into the walls of the sheep barns in the Crau, hundreds of inscriptions recount the passage of shepherds. The doubly lapidary graffiti, requiring long and slow interpretation, reveal brief excerpts of their lives and constitute true archives of Alpine transhumances. 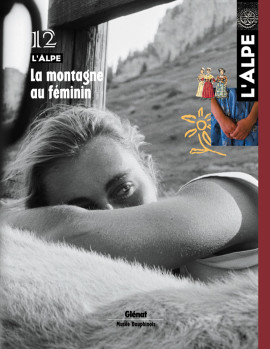