Playground of Europe
The title of Leslie Stephen’s book, published in 1871 in London, was a remarkable success in designating the Alps and their many facets for freetime activities. It is in the spirit of true explorers that Alpinists struck off into the isolated regions, teeming with virgin summits to be conquered and local populations each more exotic that the other. Excerpts.

Alpine Encyclopaedic Dictionary – Alpine clubs in Europe
Form Alpine clubs. The idea came into being while efforts to conquer the summits were in full swing. Starting at the end of the 1800s, after the British, Alpine clubs sprang up throughout Europe. Highly elitist (and most often closed to women), they subsequently played a significant role in popularising mountain activities.

Alpine tournaments
Ethnologists ahead of their time, many voyagers travelled through the Alps in the 1800s, bringing back accounts of the strange customs perpetuated by mountain inhabitants. An example, the traditional contests of strength in Switzerland described by Jules Gourdault, the author of a beautiful, two-tome work entitled La Suisse, studies and travels through the 22 cantons (with 750 wood engravings), published in 1879 in Paris by Hachette.

The cornichon game
An original Alpine version of boules has long been played in Savoy. A fun ritual reserved for men, the cornichon game combines both skill and the capacity to imitate, bringing together inhabitants for a festive trip around the entire village.

Sports and games
Gérard Vandystadt runs one of the largest photographic agencies devoted to sports. Though the agency is well known primarily in the fields of soccer, tennis and figure skating, mountain activities are also very present in its archives and clearly show that above and beyond skiing and mountaineering, sports are alive and well in the Alps.

Kings of the cols
The Tour de France will turn one hundred this summer and some 92 editions will have taken place in the «  Grandes Alpes  » between the Col des Aravis and the Col de Restefond. The sports daily L’Equipe, the initiator of the race, recently published a remarkable historical volume to celebrate the event. And it would appear that writing for a sports journal is not incompatible with lyrical flights and high literary quality.

The best job in the world
«  No, not the oldest, but the best. That is at least what everyone seems to think.  » That is how Jean-Marc Aubry talks about his profession as a mid-altitude guide. Hiking the Alpine meadows with diverse groups is however not a piece of cake. The tale of a week of vacation, recently published by Editions Guérin, provides a mischievous insider’s view of the job. Worthy excerpts.

Mountaineering and women
Disregarding the criticism, they took on the snow and rocks in long skirts and corsets. A handful of determined pioneers opened the doors to mountaineering for all women. Over the past two centuries, women have earned their place in what was formerly a male domain. But though they have conquered the summits, equality still lies far in the future.

Wings of a different colour
The travellers on a breeze, many of them experienced pilots, no longer simply fly down to the valley with their paraglider. These long-range navigators now travel hundreds of kilometres, hopping over entire mountain ranges with their tiny bits of coloured fabric. A sport for master flyers offering subtle interactions with the third dimension and the exhilaration of vast spaces.

The true top of the world
Braco the guide, at the back of the café, always tells the same story. Preferably when a storm is letting rip. The fog rolling in to hide the church steeple is in his head as well. It is his inspiration. Braco was a great guide. He still is, at least in his stories, even if he no longer does much climbing. His voice accompanies the high winds, like a background noise. He speaks of his greatest climb, the Pic Coolidge. Careful, do not laugh, it might make him angry.

Ad meaning
Mirroring our desires, advertisements allow us to glimpse the currents of thought eddying through our societies. The small milieu of mountain sports offers a fascinating study object. An inquiry into the underlying motivations of Alpine activities.

Perverted values
During the Vichy period, the glorified values of mountaineering were turned into propaganda for the collaborating regime. The policy of the government was simple, regenerate the nation through sports. A study on an ideological high jacking.

A Turkish prince in the Alps
Held captive at the foot of the Vercors, the victim of political intrigues, Sultan Djem was bustled all about the Alps. The tragic fate of an exiled Ottoman prince, relegated to cold fortresses and the arms of charming young women.

A year of Mountains – what for ?
«  That thing«  , as de Gaulle qualified the UN, just terminated the international year of mountains 2002 with a World Conference held in Bichkek, the capital of Kirghizstan. A very showy undertaking complete with magnificent declarations and all the best intentions, summed up in an official document, the Mountain Platform. Down on the floor, Garth Willis listened attentively and he left the conference with mixed feelings. The pragmatic analysis of a person active in the field.

Alps abroad – a sun in the black box
In the Carpathian Mountains, in the northern part of Rumania, many peasants still live to the gentle rhythm of ancestral customs and the preserved old ways. Ennobled by the perceptive vision of photographer Dan Dinescu, their gests and manners, their faces and villages radiate anachronistic light. A voyage to Maramures.

Passages de l’alpe
Does an Alpine musical culture exist ? If yes, what does it elicit in the imaginations of modern composers working in the fields of jazz, contemporary music and those revisiting traditional music ? These questions will be a central element in Passages de l’alpe, one of the highlights during the Jazz Festival in Grenoble that Daniele Jalla reinterpreted in his own way. 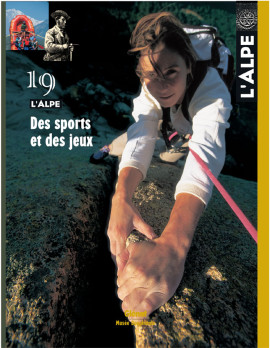