The grand journey
The Via Alpina is the first identified trail tying together the eight countries of the Alpine arc, namely Austria, France, Germany, Italy, Liechtenstein, Monaco, Slovenia and Switzerland. A route made to bring people together and to discover the many cultures and heritage of Alpine Europe.

Homo touristicus
Is Alpine tourism colonialist ? From time immemorial, people have sought rest and relaxation in the pure air of the summits with the naive impression of discovering the mountains. Ambiguous in nature, their fascination with the mountains has always entailed cultural domination, in light of which the local populations have had to redefine their identity.

MEDITERRANEAN ALPS
Heave ho !
Similar to Venus, the Alps seem to rise from the sea. At the start of the Via Alpina, in Monaco, the traveller sets off, amid the many Mediterranean fragrances, breathing in the salt-charged air.

PIEMONT-UBAYE-QUEYRAS
Surprising travellers
They inhabit the Alps of dreams. From one leg of the journey to the next, they encounter people from here and there who bring to life past military exploits in lofty citadels, the long treks of peddlers, the adventurous stories of travellers and the escapades of smugglers.

VAL D’AOSTE-VALAIS
Saint-Bernard’s wonders
A stone’s throw from the Mont Blanc, travellers first take in the luxurious vegetation of a welcoming countryside and the pleasures of the rich food. They continue along the ancient trail worn by thousands of pilgrims up over the Grand-Saint-Bernard and on, to discover the glaciers and torrents of the Entremont in the Valais.

GRISONS-LOMBARDY
Colliding cultures
At the extreme reaches of Switzerland and Italy, Romanche and Walser mountain people continue yet today to cultivate their mountain pastures and customs. But modernity is slowing penetrating this overly perfect picture. A collision of cultures ranging from the pious images carried by illegal immigrants to the poetic «  arterre  » events.

BAVARIA-TYROL
History-laden mountains
Striking contrasts await. In a single week, the hiker encounters the stupendous Zugspitze railroad, the fate of Louis II of Bavaria and the worker saga of the Schwaz mines, all the while discovering the more pleasant aspects of life in the upper pastures and the subtleties of Tyrolian hunting.

BAVARIA-AUSTRIA
In (double) praise of hiking
Rediscover silence and learn again to listen to others. These are virtues reacquired during the hike through the Berchtesgaden national park. A landscape shadowed by the memory of Hitler’s infamous «  eagle’s nest  » and where the contrast between the occasionally noisy atmosphere of the huts and the pure silence of the great outdoors is an invitation to indulge in meditation.

CARINTHIA-SLOVENIA
Borderless Alps
Three cultures meet in these eastern Alps which have suffered so much from borders that now no longer exist. Here, Slovenia reveals its many mountains and marvels that have inspired mountaineers, hermits and naturalists. A far-away land that is surprisingly close.

SLOVENIA-ITALY
Europe in miniature format
From up in the Julian Alps and their limestone summits, the path plunges down into the depths of the Karst, on the way to discover the mines and caves, while the somber forests give way to vineyards. Having started in the lapping waves of Riviera, the Via Alpina comes to an end at the Adriatic seashore, in the salt-filled air of Trieste.

The Alpine Encyclopaedic Dictionary – Mountain refuges
Clinging tight to the mountain, each refuge is a port of call for hikers. A shelter whose construction and daily life are heavily influenced by the major constraints exerted by the altitude and which must now adapt to the changes in an increasingly diversified clientele. 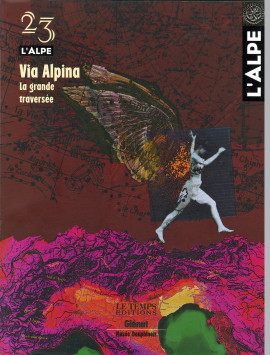