Icons
The little chimney sweep is a definite favourite. The image of this character, equally popular among both the public and illustrators, has undergone a number of changes since the 1600s. Presented in a number of manners, the portrayal of these children also says volumes on society. Often idealised, representing different values or even the political symbol of the annexation of the Savoy, little chimney sweeps are a major figure among popular icons.

The last bivouac
Of all the bad ideas ! Undertaking this ascent in the middle of December was one of the worst. Joseph was furious against himself and against the storm punishing the mountain. The word storm was not even up to it. After running through tempest, whirlwind, blizzard, he decided there was no word for weather so hateful that it seemed intent on throwing the mountain itself down on its knees.

The water people or William Tell
Rising up from the Swiss lakes, the mythical lake people have played a major role in the national identity. Just 150 years ago, the discovery of the prehistoric lakeside settlements created a sensation. In the collective Swiss imagination, the proud lake people and their villages on the water replaced the legendary heroes and the mountain shepherd. The celebration of the anniversary of the discovery is a chance to take a closer look at these so-called ancestors.

Aristide Bergès, the man of light
One hundred years ago, Aristide Bergès died. Glorified by some, contested by others, the paper manufacturer was one of the first to use water power and became known as the «  father of white coal  ». In the Isère department, a museum in his honor will soon open.

Are the mountains too beautiful ?
In response to the last issue on towns and cities in the mountains, Grégoire Feyt, a geographer working for the community of towns in the Grenoble area, sent us this text. A discussion ensued with André Pitte, the director of L’Alpe. The central question was whether Alpine cities are condemned to mediocre urban conditions.

Salt through history
White gold has been extracted for thousands of years in the mountains near Salzburg. The white substance drawn from the depths with great difficulty in the Hallstatt salt mines has been a source of wealth for the miners. Still active today, the mines have already rendered countless relics and recent discoveries have shed new light on the prosperity of the mining community. An excellent exhibition in the Bibracte museum, in Bourgogne, presents new information on the salt town.

The first mountain film
The crossing of the Grépon was a daring feat filmed in 1923 without any special effects on one of the most difficult summits in the Alps. Directed by André Sauvage in the Aiguilles de Chamonix, the film was hailed as a feat in itself and launched many a vocation. Of the 7 780 metres of shoots taken by this pioneering filmmaker, unjustly forgotten today, very few remain.

A stone zoo
Names for mountains appeared rather late in the Alps, where place names were most uncommon until the start of the Middle Ages when the fertile (i.e. useful) regions and waterways were named. It was only in the 1200s that place names became more varied and precise, based on what were often animal names used by inhabitants.

The richly endowed Beaucroissant fair
Centuries old, the Beaucroissant fair is still alive and kicking. The colourful event in the Dauphiné region marks the start of autumn and brings together in the village livestock, merchants, farmers and city dwellers looking for a bit of rurality. Such enthusiasm for a rather archaic event is rather surprising. A well chosen date and nostalgia for a particular commercial relationship probably explain the long success of the fair.

The singing forest
A particularly resonant wood grows in the north of Italy, on the last slopes of the Julian Alps. A wood used to make violins. In the heart of the centuries-old fir trees of the Tarvisio forest, a crystal clear voice is hidden that enchants the instrument makers of Cremona and constitutes a new resource for the Frioul region.

Chamonix on the Seine
It is not the mountain village, but it truly is the Seine twisting and turning at the foot of the Eiffel Tower and of the… snowclad summits ! This surprising and surrealistic image of the mountains, produced for an ad campaign, is the work of an image witch-doctor, Jean-Marie Vives, who also worked as a decorator for the film Alien, the resurrection.

A pacific arch
This handsome monument, installed on the outskirts of the city of Suse, on the road to the Mont-Genèvre, is a hymn to diplomatic action. It celebrates a triumph of dialogue over war when the highly strategic territory and its populations were folded into the empire. Appointed to a high position, king Cottius is seated next to the emperor in the frieze decorating the arch produced by local artists, but according to official artistic standards. 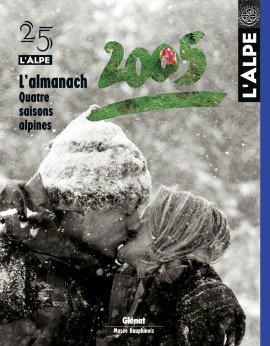