Union ? Annexation ? Cession ? Anschluss ? Plebiscite ? Referendum ? Legal terms are never neutral and many have been used to reflect current politics and ideologies since 1860. Loaded words, used and misused, that must be put in their historical context. That of a new democracy.

The grand history of the States of Savoy

Take a new look at the history of Savoy through its geography ? That is the idea of this new saga that uses maps and distances to retrace 1 000 years of migrations in a territory with very flexible borders. A look that also questions the uncertain meaning of the word Savoy and raises the issue of Savoyard singularity.

A crossroads of nationalities

Was the annexation of Savoy by France a logical event ? Certainly, if one analyses the historical and geopolitical forces behind an event born of the changes taking place in the 1800s. Throughout Europe, nationalist sentiment was emerging and public opinion coincided with political action. An event in preparation since the French revolution.

The Savoy, a Swiss canton ? Petitions were signed and the possibility was examined. The idea pleased the populations near Geneva, but the young confederation nonetheless refused a solution that would not have met with favour in France.

Italy came into being in 1861 just one year after the annexation of Savoy and Nice by France, an event that play a major role in unifying the peninsula under the King of Piedmont-Sardinia. A skilful diplomatic and geopolitical move carried off brilliantly by Cavour and Napoleon III.

Disputed until… 1989 (!), the area around Nice offers an excellent example of the shifting borders between France and Italy. The subject of difficult negotiations since the annexation in 1860, the border in the southern Alps was not finally set until Europe partially did away with the problem.

Impressive is perhaps the word. The Savoyard journalist was hyperactive, modern, democratic, in favour of science, technology and liberty, a protestor and prolific author, notably of the superb book Nice et Savoie.

François Deladerrière, an artist photographer from the Arles school, takes a new look, paying the utmost attention to detail, at the plates illustrating a book published in 1864. What remains today of the «  picturesque sites  » ?

The events organised for the 2010 celebrations.

Sardinian cadastre for a French border

The map drafted by the Sardinian government at the beginning of the 1700s bears witness to the relations between France and the Savoy. A reference document and means of pacification, it survived the political upheaval and served as the basis for the new borders in 1860.

A royal enclave in the Republic

The Hautecombe abbey was the last territory of the Savoyard dynasty in Savoy. Located on the banks of the Bourget lake, the princely necropolis had a very special status recognised by an international agreement ! The small ecclesiastical fief survived until 1983 and the death of the last King of Italy.

In the 1800s, the Savoy, similar to other regions, was in complete upheaval due to the industrial revolution. But also for a number of specific reasons, including the mixing of populations due to the nearby borders, the birth and development of international tourism and water cures, the inexorable decline of rural societies, etc. A new world was on its way, yet no one could foresee the extent of the changes to come.

For the event Chambéry 2010, the Savoyard capital will celebrate the past, but also prepare a future that it hopes will be very European. In 2011, the city will commemorate with the Piedmont the proclamation of Italian unity, 150 years earlier. And in the future, the high-speed train line from Lyon to Turin will constitute a considerable plus for the city.

What is the meaning of the anniversary marking the annexation of the Savoy by France at a time when Europe has abolished most of its internal boundaries ? Inhabitants, elected officials, economic players and artists have all raised the question. Particularly given that the upcoming administrative reorganisation in France could turn the Savoy into a vast experiment. 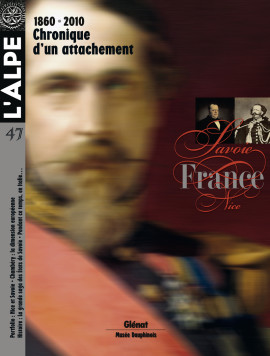