L’Alpe 66 : Eccentrics, nuts and other dreamers…

They danced naked on the hill, wove togas made of unbleached cotton and ate the fruit produced in their gardens. In 1900, in the Tessin Alps, a small group invented the return to Nature and the counterculture. Sixty years before the hippies ! Monte Verità was a sanctuary for alternative thinking, a «  spot  » for creativity and utopia, and it drew large numbers of artists and intellectuals. A magic mountain waiting to be discovered.

Louis II dreamed of a fabulous castle on a rocky pinnacle in the Bavarian Alps. A medieval utopia, a royal whim to bring the ancient Germanic legends to life within its walls. A safe haven for a king who loved his dreams more than he loved power…

Baquet has his fun !

Everyone is familiar with the playful attitude of the cellist-actor-humourist, his love of the Alps, skiing and mountain climbing. The images that Maurice Baquet made with the help of Robert Doisneau are ample proof of that. Still, it is a surprise to discover this other series of photos taken in Chamonix by Philippe Gaussot, at the time a journalist at the Dauphiné Libéré newspaper, and never before published.

The density of mountains 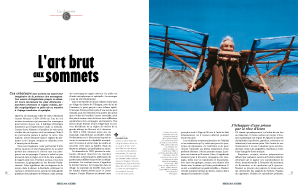 Outsider art at the summit

These unusual artists used the mountains to nourish their imagination. A source of inspiration to stimulate their craziest inventions, including airborne machines and flying objects, an outdoor encyclopaedic garden and unusual, light-hearted hikes with the herds to the upper pastures.

Charles Fréger photographed wild men. Highly colourful people who celebrate the winter solstice or the return of spring during festivities throughout Europe. But are the disguises in fact a uniform like any other ?

Edmond de Palézieux was a painter, sailor and lover of Lake Geneva. He painted lake scenes and landscapes from beginning to end of his career. At the Musée du Léman, in Nyon, a wonderful exhibit looks back at the painter’s fascination with water and boats.

Two centuries of history ranging from crinoline to high-tech breathing fabrics. That is the topic of the exhibit at La Châtaignière in Yvoire, where it becomes clear that clothes designers have always been inspired by Alpine sports, both summer and winter, to the point of making ski pants, down jackets and moon boots eternally fashionable.

The archives of human diversity

The Ethnographic museum in Geneva has turned over a new leaf. The prestigious, century-old centre, an important site of study on human societies, struggled for years in cramped quarters, but can now display the wealth of its collections that bear witness to the city’s very worldly outlook. A new building, new arrangements on the historic site, new shows and new exhibits that will all be inaugurated on 31 October 2014. 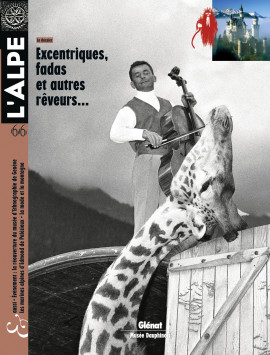