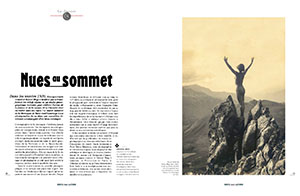 In the 1920s, Georges-Louis Arlaud and Marcel Meys had no qualms about transforming the Alpine summits into an intimate photographic studio to celebrate the bonds between women and nature. Is Utopia perhaps to be found in the Alps ? The National mountain museum in Turin pays tribute to the nu photographs in a travelling exhibition with a handsome catalogue.

Among other extravagant features of the Monte Verità region is the Sanctuarium Artis Elisarion. Built in 1927 in Minusio (near Locarno, in the Tessin canton, Switzerland) by philosopher Eduard von Mayer, the centre housed, in a secondary building, a stupendous, circular painting covering the entire inside wall of a rotunda (measuring 3.5 x 26 metres), titled The clear world of the blissful (by Elisàr von Kupffer). 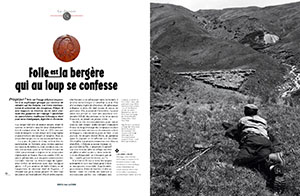 When shepherdesses kneel before wolves

Priapic ? That is the cliché drawn from Greek mythology that continues to characterise shepherds to this day. The Greeks always presented Priapus, the shepherd, with an erection. But what actually goes on up in the high pastures ? Guillaume Lebaudy, an expert in pastoralism, has collected accounts, legends and songs.

Women progressively occupied the central role in Swiss tourism posters. Between 1900 and 1930, ski resorts discovered an effective means, deemed acceptable in some places, scandalous in others, to promote Alpine tourism. The result was a new iconographic style in which the feminine body was liberated, eroticised and even transformed into a seductive landscape. 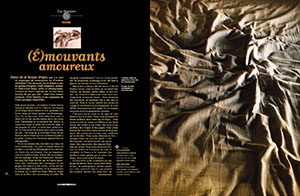 In sheets such as these, who has not dreamed of mountain summits and furious oceans ? Using words, drawings and light, Cécile Beaupère, artist, and Jean-Louis Roux, writer and photographer, mingle their perceptions of the most enduring story, that of budding love. Carte blanche to these (almost) immobile Alpine travellers…

Mountain design, the two words together are not an oxymoron, far from it. More and more designers now draw their inspiration from mountains. Both for the shapes of objects and the choice of materials. The challenge is to blend contemporary and traditional styling, using the Alpine ciphers and symbols.

Franz Michael Felder, a self-taught farmer in Austria, that nothing destined to become a writer beyond his own desire, succeeded in just three short decades (1839 to 1869) in producing a strikingly perceptive set of literary works on life in a remote valley of the Vorarlberg. A place where reading was (already) a curious activity. To say nothing of writing. A text that resonates surprisingly well with our own times…

Exhibition
In praise of diversity

Geneva is very patient when it comes to museums. For the past 17 years, the Art & History museum has attempted to overcome «  popular  » efforts to halt the project of architect Jean Nouvel. In the meantime, the Ethnographic museum recently opened to the public, after some 15 years of delays (and changes in the project) in the country of direct democracy. A guided visit.