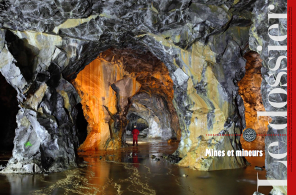 A rich vein of Alpine mines

Mining is one of the rare activities, with pastoralism, that enabled people to live in the mountains and thus maintained populations in hostile environments prior to the industrialisation of the valleys and the later development of winter sports. From Slovenia to the Oisans range in France, for thousands of years the Alps have been a focal point in the history of technology, industry and the working class. By Marie-Christine Bailly-Maître, archaeologist and director of research at the CNRS.

The salt of the earth

Hallstatt is much more than a picturesque village in Austria. It is above all an extraordinary archaeological dig. The value of its necropolis in the upper valley of the Salzberg is so great that the village gave its name to the first Iron age. The salt mines have surrendered extremely well conserved relics bearing silent witness to the life of the miners during the period just before recorded history and that, in the hands of archaeologists, express volumes. By Kerstin Kowarik, archaeologist, and Hans Reschreiter, prehistorian at the Museum of natural history in Vienna. 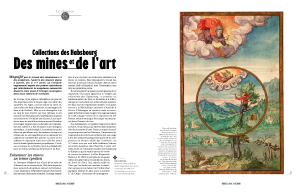 Mines and art in the Hapsburg collections

As early as the 1500s, the world of Alpine mines and miners, magnified by the work of illuminators and sculptors, enthralled the Austrian princely families who devoted to it sumptuously illustrated manuscripts as well as very bizarre cabinets of curiosities. By Joëlle Rochas, Ph.D in history and curator.

This fan of progress had the makings of a hero in a novel by Dumas. The son of a farmer and ingenious, self-taught entrepreneur, Ignaz Rojacher purchased in 1876 a gold mine in a remote valley in Salzburger Land in Austria, not far from the Grossglockner. Under his direction, the mine flourished to the point that he installed electricity and even… a telephone. By Florian Bachmeier, independent photographer, and Claudia Teibler, Ph.D in art history and journalist. 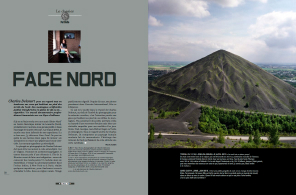 Charles Delcourt observes with great tenderness the people living at the foot of the terrils in northern France. The artificial mountains have occasionally been transformed into ski slopes and… vineyards ! A profoundly humanistic approach to these other Alps. By Pascal Kober, editor in chief of L’Alpe.

A 42-day strike halted work on the Isère-Arc tunnel in January 1952. The gigantic work site to supply the Randens hydroelectric plant in the Vanoise mountains employed almost 3 000 workers, 14 of whom were killed during the work. Michel, a child at the time, and Raymond, a trade unionist, remember the fight, a time of both revolt and solidarity. A moving account… By Michel Étiévent, writer, journalist and historian. 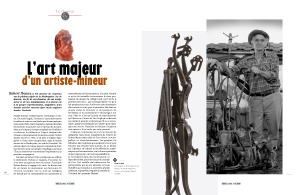 Major art from a miner artist

Robert Ibanez was a coal miner on the Matheysine plateau in the French Alps. His entire life, in his drawings, sculptures and installations, he brought to life his very personal, and different, perception of the working class, often raw, but always tender. A portrait. By Jean Guibal, head curator of cultural heritage and director of the Musée dauphinois.

The forgotten ascents of the geographer-officers

Revolution ! What if the list of “first ascents” in the history of mountaineering had to be rewritten ? During two mapping campaigns in the Alps, geographer-officers climbed a vast array of summits around 1750 and then around 1850. That is, well before the sportsmen arrived on the scene… A fascinating inquiry to launch the debate. By Paul Billon-Grand, engineer, Olivier Joseph, researcher on the history of science and techniques, and Alexandre Nicolas, cartographer and geomatician. 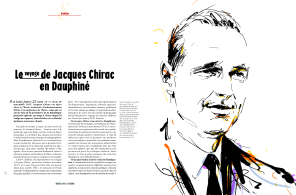 Jacques Chirac in the Dauphiné

In November 1957, he was just 25 years old. At the time, Jacques Chirac was a student at the École nationale d’administration (ENA). At the Isère prefecture, the presidency was a far-off dream and the young man had to do an internship and draft a report. Pascal Kober, editor in chief of L’Alpe, presents here a few choice morsels.

The chaos rampant in the world is also present here, just a short distance from the former customs office in Menton. A border along a ridge that is all the more virtual in the Schengen zone. Olivier Weber, writer, former ambassador and war correspondent, met desperate men and women there. He delivers a heart-felt account in a book recently published by Éditions Paulsen, the culmination of his exploration of tension zones around the planet.