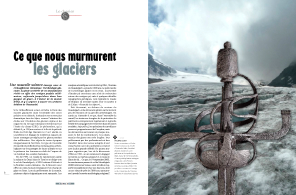 The whispers of glaciers

A new science has emerged with global warming, namely glacier archaeology. The rapid melting of these great ice masses has revealed relics that are occasionally thousands of years old, encased in a sheath of ice, similar to Ötzi, the mummy. It is urgent that we save these remarkable archives of human history. By Philippe Curdy, former curator at the Swiss national museum and later at the Valais museum of history.

Emmanuel Le Roy Ladurie, on vines at the foot of glaciers

The historian was one of the very first to take interest in the history of the climate and of weather. Who else would have the necessary and sufficient authority to inject this field of study into the contemporary debate on global warming ? By Jean Guibal, editorial director of L’Alpe.

The weather of famines and revolutions

Emmanuel Le Roy Ladurie welcomed us in his home, in the calm shadows of his library that he has bequeathed to Météo France. For decades, the historian has studied the “climate of wheat” to analyse its many unpredictable events and social consequences. By Sophie Boizard, editor, and Jean Guibal, editorial director of L’Alpe. 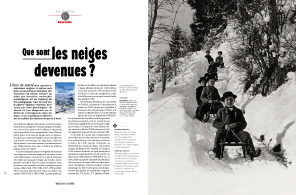 What happened to the snow ?

The status of glaciers, snow packs and other frozen soils is a valuable indicator of changes in the climate. The highly instructive objective of Quoi de neuf sur la planète blanche  ? (Glénat), a book by two glaciologists, is precisely to present the latest scientific research in the field. They lay out here their analysis of the decrease in snow in the Alps and its consequences for the continued existence of ski resorts. By Bernard Francou, glaciologist and geomorphologist, and Christian Vincent, glaciologist and CNRS research engineer at the Institute for environmental geosciences in Grenoble.

Ski galore, the end of the myth ?

The sector for mountain tourism is mutating rapidly and questioning its future. After having placed (virtually) all its bets on skiing starting in the 1960s, the resorts are confronted with a structural crisis that is accelerating due to the chronic lack of snow. So what is required to revive economic activity, a light touch or profound changes ? By Christophe Clivaz, associate professor at the Institute of geography and sustainability at the University of Lausanne. 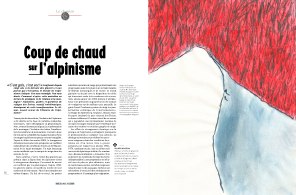 Mountaineering in a hot spot

“It is grey and it is dry !” The mountaineering field, confronted with melting glaciers and falling walls, is trying to adapt. Not without nostalgia. Not without doubts. How are the changes taking place ? Mountaineers, guides and the keeps of shelters in the emblematic Écrins range speak of the transformation. Is the climate a new actor in the history of mountaineering ? By Philippe Bourdeau, professor at the Institute of Alpine geography in Grenoble.

Laurence Piaget-Dubuis, the agony of a glacier

Climate refugees ? In his work on the Rhône glacier, the Swiss photographer and graphic designer contrasts the fragile tents in Europe for migrants, some of whom have fled their country due to global warming, and the gigantic, grey tarps spread out at high altitudes to slow the melting of the ice. A grating comparison…

Are plants the sentinels signalling climate change ? Throughout the Alps, numerous teams of researchers, botanists and ecologists study plants and the soil to measure the impact of global warming on Alpine ecosystems. They even simulate temperature rise by moving plants to lower altitudes where it is hotter. A report by Caroline Audibert, a journalist interested in the relations between people and their environment.

A large exhibition organised by the German, Austrian and South-Tyrolean Alpine clubs in Munich reviews the history of shelters and hiking trails in the Eastern Alps. “Up there !” raises the central issue of how to bring food to the shelters. In the kitchen, the most important room in a shelter, a social comedy is played out where each participant must remain in their place, but will nonetheless try to obtain a few privileges… By Vera Bedin, cultural mediator in Bozen (South-Tyrol, Italy) and cultural councillor for the South-Tyrolean Alpine club. 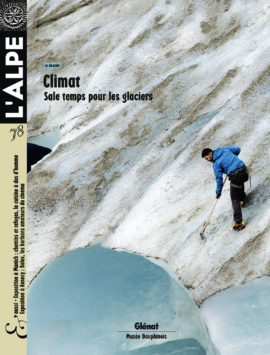