Culture vs. nature
Somewhere between man and animal, the wildman lives in caves deep in the forest, sheds tears over trees felled by the ax and makes cheese with chamois milk. He may be found in all mountain ranges and in low-lying forests as well. Is he a dream of paradise lost or the relic of a virtually universal founding myth ?

«  I met the Yeti  »
A strange beast, a cousin of the wildman, wanders the mountains of the world under the name Bar-manu or the Sasquatch. In the Himalayas, it is called the Yeti, the famous «  abominable snowman  ». Like Tintin, Messner ran across the monster in Tibet in July 1986. Long (re)search ensued, which is presented in his latest book recently published by Glénat. Excerpts.

Rumour and science ?
Alpine fantasy has been haunted for centuries by a mountain-going hippogryph lacking any magical powers. Called the jumart, this kind but capricious chimæra, mentioned by Kant and Voltaire, has intrigued a number of scientists. Certain people maintain that they crossed paths with the strange beast during their childhood.

A guide to the Dahu
Highly sought after, this animal, though very fearful and non-aggressive, nonetheless claims many victims. Perfectly suited to scrambling around on mountain slopes, it has a knack for vanishing when hunters approach and has never been caught in any of their traps. In danger of extinction due to the terrible scepticism virus, it remains a mystery for science. Only those most pure of heart have ever succeeded in coming near the mythical Dahu.

Fire-breathing dragons
A legendary and composite animal, the dragon combines all four elements, fire, water, earth and air. Though not specifically Alpine in nature, it is ubiquitous in mountain regions. The great victory won over dragons by civilising heroes illustrates the triumph of man over the blind and violent forces of untamed nature.

Alpine seasons in the Middle Ages
A bear hunt, foxes prancing through a snowbound forest, herds on high in the summer pastures, falcons, hare and horses. An entire menagerie takes part in human activities in the medieval cycle of the seasons at the Eagle Tower of the Trente castle in Italy.

Hunters worthy of the name ?
Quiet anarchy may be the term to qualify Alpine hunting in the old days. With a rifle hidden in the hay stack and his pockets full of snares and bait, the Alpine farmer stalked marmots and prowled after chamois, while the upper crust flushed the tétras-lyre. Wildlife management was in the hands of the poachers !

The royal emissary
Hunted relentlessly for its magical and medicinal properties, the ibex was on the brink of extinction. In a strange twist of History, it was the King of Italy’s love for hunting that saved the animal.

The man who saw the bear
Mingled traces of claws and fingers on cave walls bear witness to the long and mysterious relationship between man and the bear. For thousands of years, they have crossed paths, shared the same territories, feared and fought each other. A relationship made up of fright and fascination.

The northern spirit
Since the beginning of time, arctic animals have come to life on stone and ivory. Swimming bears, birds on wing, fantastic creatures. This rich tradition is a source of inspiration for contemporary Eskimo artists in their very original creative endeavours.

Who is afraid of the big, bad wolf ?
Lively and impassioned was the reaction of a provocative L’Alpe reader, for whom the art of dialectics holds no secrets. Following the publication in the third issue of excerpts drawn from a round table discussion on wolves and transhumant shepherds organised by the Musée dauphinois, Claude Mauguier sent in a long, hand-written letter. Op-Ed.

Possible coexistence ?
Sheep farmers are afraid of the big, bad wolf ? Some farmers, however, tell another story, in direct contradiction with the majority view. They made the effort to go see if wolves and shepherds in other regions have succeeded in coming to an understanding. Their account.

Leave the wolves alone !
Scarlet-faced and hopping mad. As red as the riding hood of lore. Urbanite Cavanna, a seasoned infighter armed with words, takes exception to the many daydreamers of all ilk who would tend to forget that wolves are in competition with another large predator – hunters ! A heart-felt appeal.

A terrible fright
Machicruta, Papotchantel, Ratepenade, Miare-couette, Carabi-bonnet, Nitoula, Micaraouda. The names alone are enough put a fright into a daring young person. Lurking at the bottom of lakes and ravines, hidden at the back of barns or deep in the forest, hybrid creatures terrible to behold await naughty children. Varied in form, the terrifying Kinderfresser play above all an educational role, as the exhibition at the Musée dauphinois makes clear.

Wanderlust appeased
One hundred twenty-three mountain shelters, two hundred thousand meters climbed and descended, a seven-month hike from the Adriatic to the Mediterranean under the watchful eyes of the choucas. A transalpine journey, from refuge to shelter, from Hütte to rifugio, to observe and penetrate the habits and customs of the high-altitude summer shelters and their inhabitants, both temporary and permanent. 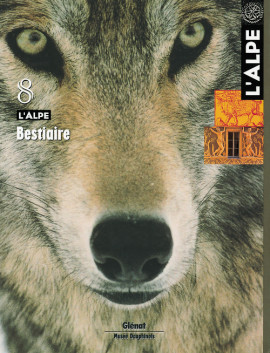