These names, for Alpine populations living near the sea, in the Southern Alps and the Northern Alps respectively, date back only to the Revolution. They suggest that distinct populations exist, at different altitudes, but that they all belong to the same Alpine group. Above and beyond the administrative considerations, do these terms distinguish these groups from the other Alpine populations ? The answers are rather equivocal… By Jean-Claude Duclos, director of the Musée Dauphinois until 2011, designer of museums and exhibitions. 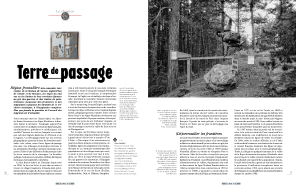 The Southern Alps have long been a highly disputed area, previously adjacent to the House of Savoy, now to Italy and Monaco, whose borders have shifted with each war and peace treaty. The turbulent history of the borders and migrations has moulded the identity of this patchwork territory with its complex imagery. More than ever, migrants are a highly contemporary issue. By Yvan Gastaut, PhD in history and assistant professor at the University of Nice.

The marvels of Clarence Bicknell

The English scholar, humanist and admirer of the Southern Alps was the first to seriously study the fantastic, protohistoric rock engravings in the Vallée des Merveilles of the Mercantour range. The centennial of his death in 1918 will be commemorated this summer. By Jean-Loup Fontana, head curator for heritage. 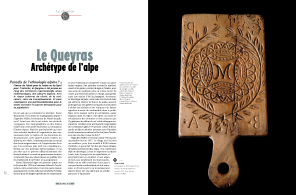 The Queyras, an Alpine archetype

Heaven for Alpine ethnology ? Similar to the Valais in Switzerland and the Tyrol in Austria, the Queyras is seen as a representative, if not emblematic territory of Alpine culture. But with the ever present risk of becoming a cliché, a caricature, even a travesty. To say nothing of the resulting patrimonialisation that is both excessive and often baffling for the local population. By Jean Guibal, head curator of cultural heritage and editorial director of L’Alpe.

Here, I am at home. Giono has been portrayed as the poet of the Provence, whereas in fact, he wrote and revealed more about the mountains. It was there, in a cloister of rock and torrents, that he felt most at home. But the elevations to which the “static traveller” guided us had little to do with topography. His were dreamed mountains. A new world to be invented. By Jacques Le Gall, assistant professor of French literature at the University of Pau. 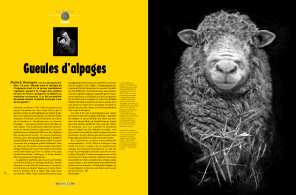 Patrick Domeyne is a photojournalist. A real one. An old hand who learned the trade under the demanding conditions of the regional, daily press. When he is not shooting the racers in the Tour de France, rock climbers or musicians on tour, he turns to animals. His secret garden that contains some truly striking images. By Pascal Kober, editor-in-chief at L’Alpe.

Tourism in the Southern Alps has gone through a number of phases. Starting with the first health resorts along the Mediterranean coast, followed by the mountaineers climbing the summits and finally the rush for white gold in the form of ski resorts. The current diversification of activities has initiated a new phase, accelerated by climate change. Is this the post-tourism era ? By Émeline Hatt, instructor-researcher of urbanism and development at the University of Aix-Marseille. 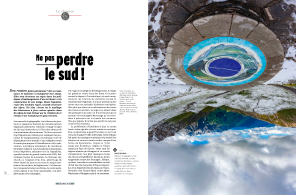 Roads as patrimony ? From its inception, tourism changed the essence of roads. They have become central issues in territorial development policies and in the building of a territorial image. Route Napoléon, Route des Grandes Alpes, Grande traversée des Alpes, Via Alta, there are numerous circuits offering high added-value in the Southern Alps. A look back at the beginnings of the road network and the most recent changes. By Xavier Bernier, professor of geography at the University of Paris Sorbonne.

Following a difficult, even conflictual start in the 1970s, opinions on the national parks have shifted favourably with the increasing importance of environmental issues in society. To the point of creating, in the Southern Alps even more than elsewhere, a new relationship with mountains ? By Xavier Fribourg, head of the territorial department in the Mercantour national park. 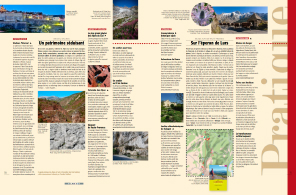 How best to discover it ? Simply visit the villages of the Alps, often suspended high on slopes and always striking in beauty and character. Here a colourful market and a transhumance “vogue”, there the wooden barns, a pilgrimage to a sanctuary, a music festival, etc. Follow the guide ! By Caroline Audibert, a journalist attentive to the relations between humans and their environment.

A delicious stroll from dish to dish throughout the Southern Alps. From table to table, from North to South, from lard and butter to olive oil, from cow milk to goat milk, from ingenious dishes without tomatoes to those with them. From northern ravioles to Provençal delicacies rich with herbs, a wealth of savours and luscious fragrances awaits. By Henri Pelletier, freelance journalist and lover of good things.