Encountering the bush in the Hautes-Alpes

The Canadian, Harriet Rosenberg, was a young student when she hitch-hiked through the Hautes-Alpes department in the 1970s looking for the village that would become the topic of her thesis. She finally chose the village of Abriès in the Queyras. She demonstrated how the formation of the central State and the spread of capitalism modified the living conditions of the mountain populations. In the preface of her book, she reminisced on her initial meetings. Excerpts. 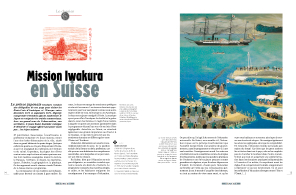 The Iwakura Mission in Switzerland

The Japanese prince Iwakura led a delegation from his country on a visit to the United States and Europe from December 1871 to September 1873. The objective was to better understand the Western countries in order to modernise Japan and to renegotiate the treaties on trade. With a finely honed sense of observation, his young secretary, Kume Kunitake, noted in great detail the events of their official voyage that also included… the Swiss Alps !

The Alps seen form the Land of Morning Calm

Ji-Young Demol Park, a Korean woman, settled in the Alps after studying the great European masters of landscape painting in her home country. What do the Swiss or Savoyard mountains look like when seen through the eyes of an informed Oriental eye ? An answer in text and images… 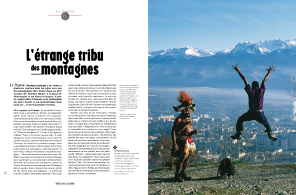 The Papouan Mundiya Kepanga travelled several times through the Alps, with his friend, the photographer Marc Dozier. In his book, titled Where the White Men Live, similar in style to the Lettres Persanes by Montesquieu, he takes a humorous and philosophical look at our civilisation and its contradictions, as well as… skiing and fondue ! Excerpts.

Lavonne Bosman, from South Africa, after spending a great deal of time sharing the daily life of the amaXhosa people, then moved several thousand kilometres to photograph the residents of two villages in the Grisons (Switzerland). One group consists of the descendants of the Walser, who arrived in the 1300s, the others are immigrants who arrived just months ago from Africa and the Near and Middle East. A luminous approach, full of sincerity and humanity, to individual stories that all merit to be told. 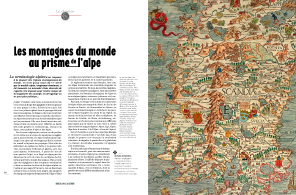 Alpine terminology was long used for most mountainous regions in the world. It was only during the 1900s that the long dominant Alpine model was put into question. The need for diverse approaches in characterising different mountainous regions became clear. An eminently political clarification… By Bernard Debarbieux, professor of geography at Geneva University.

Twenty years of exhibitions at the Ancien Évêché Museum

An ancient site brimming with history, a renovation worthy of the best Italian monuments and a rich programme presenting the local area were offered to the public just twenty years ago by the Isère department. But it was still necessary to instil life in the project over the years. The temporary exhibitions at the Ancien Évêché Museum bear witness to this ambitious, cultural objective. By Isabelle Lazier, head curator of cultural heritage. 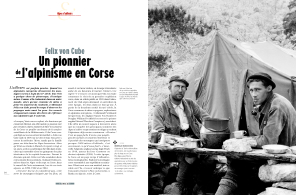 Sometimes elsewhere is nearby. When European mountaineers discovered the mountains in Corsica toward the end of the 1800s, their accounts portrayed a picturesque, almost exotic land. Almost as if they found themselves in another world, even though the island lay less than 100 kilometres from the mainland. Felix von Cube, from Germany, took time to observe the landscape and the people. His notes became a major source of information for later mountaineers. By Irmtraud Hubatschek, cellist and director of a publishing company.

A trip around Lake Geneva

In the 1700s and 1800s, the woodblock print was intended for the already thriving tourism business around the lake. With its exhibition titled From one shore to the other, the Chablais museum in Thonon-les-Bains explores the approaches, topics, techniques and artists spanning the two centuries. A magnificent exhibition. By Amélie Beaujouan, in charge of museums for the town of Thonon-les-Bains.