Hortense and the turbines
The white waters of the errant Durance mentioned by Giono are not simply «  stuff to be turbined  ». Along its entire course and over the centuries, for the water from the mountains men have invented every possible use (and conflict). From the Alpine source to the meeting point with the Rhone, the portrait of an outstanding river.

The new nature artists
On the cover of this issue, an image poses the question. Two guides are going all out to reach an improbable summit of the Meije. The bizarre photo was taken during an «  art paysager  » installation, entitled Vibration of Pontet Lake, by Pierre Dutrievoz. But is this type of approach by an artist at high altitudes really so inhabitual in contemporary art ?

The silence of the wrecks
A small inland sea in a magnificent Alpine setting, Lake Geneva hides great treasures deep in its waters. The lake bottom is home to an exceptional array of ships that recount history spanning centuries. In the depths, the wrecks, true lake monuments, have begun to relinquish their secrets. The lake museum in Nyon has organised a fascinating exhibition. 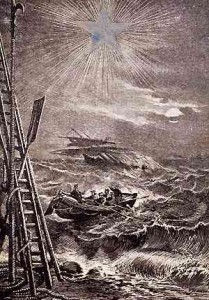 H2O
«  The oldest memory that I can bring back is of my fall. A long fall, yet soft, not at all frightening. I was not actually falling, but floating. I had no weight, no substance. The air played with me as if I was a part of the air itself. It twisted and turned me every which way. When the wind stiffened, I had the impression it was pushing me back up into the sky.  » A short-story.

Another sip of Château H2O ?
Tasty water. Is that really the oxymoron it would first seem ? Water quenches thirst, of course, but it can also be tasted and people have their preferences. Not only is it tasty, but there are different tastes. A pure product of its geology, each «  vintage  » has its own personality. But to detect it, you must first prepare your taste buds. A quick lesson from an experienced water taster.

From water came light
The saga of electrical production using pressurised pipelines, at the turn of the last century, signalled the domination of the mountains, their waters and their landscapes by the «  industrial genius  » of man. A great adventure.

The mountains to the north
Up north, the waters are chillier, the rocks taste of salt, the sea wind brings the mountain pastures to life, the cliff-hanging roads have a seashore look about them and the odour of seaweed can be found lingering at high altitudes. Up north means Norway, discovered with horror and fascination by intrepid voyagers at the end of the 18th century.

The locks of the torrent
Sinuous watery manes, torrents and rivers once found their fluctuating paths among the rocky debris of the mountains. Now hemmed in and cleaned of their rocks and stones, these waterways flow between solidly constructed banks. An artificial solution that has done significant damage to Alpine landscapes. Here is a call to defend the natural heritage.

Waterways in mountain pastures
High waterways link the torrents running off of the glaciers and the terraced crops on the slopes of Alpine valleys. Vital arteries, these ingenious irrigation systems take on even the steepest descents. Particularly striking examples are the Val d’Aoste and the Valais, where the complex networks, the product of centuries, elicit frank admiration. In the Val d’Aoste, the systems are still in operation. In the Valais, they are well maintained to offer travellers a refreshing halt by the water with time suspended.

Electrical cathedrals
Thanks to its dams, Electricité de France is not about to waste the mountain waters. Several decades of major projects have enabled the large national company to constitute immense quantities of reserve power and to master the vast natural wealth.

Mountains of cash
True emblems, the highest summits of most countries on the planet are represented as hieratic totems. Beyond the purely anecdotal aspect, this «  monetary  » view is not above all criticism.

Son of the mountains and the four elements
Was the knife, the son of water, fire, horn and steel, born in the mountains ? Following the example of Hephaistos, who forged the weapons of the gods under the volcanoes, craftsmen have taken advantage of the resources offered by mountain regions, Savoy, Switzerland, Piedmont, as well as Auvergne and Sardinia, to create marvellous tools.

The painter’s cow
Is it country, naive or basic art ? The work of Hans Krüsi is simply not to be categorised. Born in the very heart of Switzerland, the artist is certainly inspired by the poyas, the traditional images of the migration up to the mountain pastures. But his work is the product of a much broader creative effort and a highly original approach. 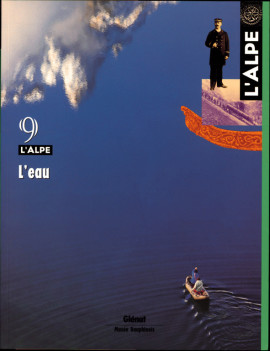